and the other concerns total escape of mass of compact orbits of the diagonal group in the space of 3-dimensional lattices. While these problems seem unrelated, we manage to construct sequences of examples of cubic rings\compact orbits for which we can compute the unit group (fundamental units) on the one hand and show full escape of mass on the other.

Given a finite extension

, and its integer ring

, it is usually a very hard and interesting question to find its unit group

. For example, in the case where

be all the distinct embeddings of

are real embeddings and

are conjugate nonreal embeddings. Then Dirichlet’s unit theorem tell us that

is the group of roots of unity in

is called a system of fundamental units, and in general it is very hard to find such a system.

In the following we shall concentrate on totally real extensions, i.e.

. A more geometric interpretation of the problem above can be described as follows. Letting

It is well known that under this map

and the discriminant of

,
and in particular if

is in the stabilizer of

in the group of all diagonal matrices. For simplicity, we shall identify between lattices which are reflections of one another through the principal hyperplanes, hence

. The other direction is true as well, i.e. the stabilizer of

in the positive diagonal group

is in the group

In order to study the phenomenon mentioned above we similarly define

is a unit if and only if

. With this notation, Dirichlet’s unit theorem states that

(and its covolume is the regulator of

up to a constant which depends on

). Moreover, it corresponds exactly to the stabilizer of

in the diagonal group

.
We call this lattice the Dirichlet unit shape of

and we denote it by

A similar construction can be done in a more general case. Recall that

is called a full module if

and it is called an order if

is a ring. Its stabilizer is defined to be

, which is always a ring of rank

, and its Dirichlet shape (shape of the

. We remark that while

-dimensional lattice, its Dirichlet shape is an

We shall denote the space of Dirichlet unit shapes of

is not canonically isomorphic to

, we shall only consider these lattices up to isometry, i.e.

We now consider our second problem of escape of mass.

Once we fix a totally real expansion

and a full module

in the space of unimodular lattices

-orbit. The other direction is true as well – any compact

contains a point of the form

as above. More over, for any

arising from full modules, we have that

if and only if

are full modules in the same field extension and

is an integral ideal, then

are in the same class in the class group. Thus, in a sense, the study of

as above supports a unique

. Given a sequence of compact

, if such a limit exists. More generally, we can consider limits of measures of the form

is a sequence of finite families of compact

-orbits. One natural choice of such families, is to take the (finite) families which correspond to class groups for a sequence of fields (or more generally sequence of orders). In dimension 2, it is known that this sequence equidistributes, i.e. it converges to the

. This result implies Linnik’s theorem which states that the rational solutions to

equidistribute when projected on the unit sphere (see [2] for details). The same equidistribution result is known also in dimension 3 (see [3]), and ergodicity arguments shows that “most” choices of sequences

-orbits coming from some fixed sequence of orders equidistribute. Given this statement, is there a sequence of distinct orbits for which

doesn’t equidistribute? In particular, is there such a sequence which has full (or partial) escape of mass, i.e.

(resp. some partial weak limit is not a probability measure)?

In this work we specialize to the case of totally real cubic extensions, in which case the Dirichlet unit shapes are 2-dimensional lattice. Given an irreducible cubic monic integral polynomial

, and one of its root

Definition: We say that a pair of nonzero integers

is called a mutually cubic root sequence if

is a mutually cubic root pair for all

, there exists a sequence of polynomials

such that for all

exhibit full escape of mass and the sequence

converges to the triangles lattice (the lattice

is a primitive 3rd root of unity).

Remark: There are many cubic root pairs. For example

is such a pair for any

contains a curve which depends on

. In addition, the set of all possible limits

in the figure below. 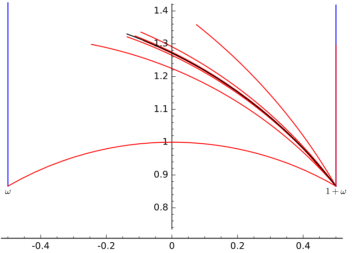