From number theory to geometry of lattices

Number theory can mean a lot of thing to a lot of people. This is a very big part of mathematics, and it contains many areas starting with the elementary number theory (“simple” congruence like arguments), algebraic number theory (e.g. field extensions and algebraic integers), analytic number theory (Riemann zeta function) and many more. I will mainly concentrate on the algebraic part, though this post will be very basic. I recommend reading my post about lattices before reading this post.

The main goal of this post is to describe a method that gives geometric interpretation to many algebraic questions. In this post I will only mention one such question, but in later posts I will mention several others.

has. Recall that if

, if there exists some

. Of course, there are integers

. In these cases, we have probably the next best thing that we can hope for: for any

The second condition tells us that either

or otherwise we can divide by

and get a remainder that is strictly “smaller” than

(which, for example, is used many times for induction type proofs). This property of division with remainder is not unique to the integers and there are several other important rings which satisfy this property. We say that an integral domain (i.e. a commutative ring with unit and without zero divisors)

Of course, the ring

is Euclidean with the norm

. Another example is the ring of polynomials

which is Euclidean where the norm is just the degree function, namely

is not defined, and for these cases we need the

in the definition of Euclidean domain. Sometimes, to avoid this, we write

In both of the cases above, the invertible elements have the smallest possible norm (1 for integers and 0 for polynomials), and when we take elements which are product of many other elements (e.g.

) we expect the norm to be very big.

The next Euclidean domain is where things start to get interesting. Consider the ring of Gaussian integers

which is a subring of the complex numbers. The invertible elements here are exactly

in the standard Euclidean distance. This leads to the question of whether

is an Euclidean norm as we defined above. Clearly, the image of

so we just need to check the division conditions. Given

, then we would be done because

. Otherwise, if we write

, then what we can say about the norm of

where we use the fact that the norm is multiplicative. We conclude that

if and only if we chose

which is very close to

in the sense that the distance between them is less than 1.

Let’s try to understand this condition visually. If we draw the points of 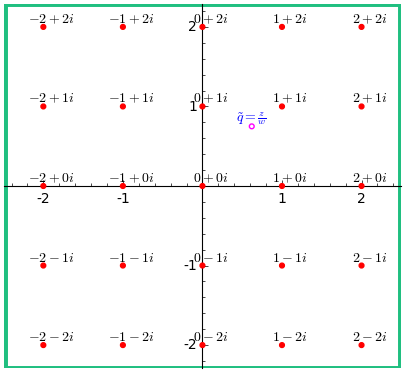 In this case we will choose

to be one of the corners of the

(in the example above, we take the point

). The middle of the square has distance

from each of the corners, and this is the farthest that you can get from the corner for any point inside the square. In other words we can always find

, and this is exactly what we needed in order to prove that

To summarize, we saw that the fact that

is Euclidean follows from the fact that any point in

has a point in

with distance at most

between them. In other words, if you put a circle of radius

around each point of

you will cover the whole plane:

This phenomenon calls for a new definition.

In other words, the covering radius is the smallest radius

such that the balls of radius

around the lattice points cover the whole space.

Remark: One can show that the minimum in

is well defined, namely the infimum is achieved at some point in

(because lattices are discrete subgroups). Furthermore, the function

is continuous and bounded (you can’t be “too far” from the lattice), and therefore has a finite maximum.

, we reinterpret our proof using the definitions above:

Now that we have this process, let’s see which other nice rings are Euclidean with this norm by finding their lattices in

. For example, the ring

and is dense there, so in particular it is not a lattice in

. While the method above for showing that a ring is Euclidean cannot be used on such a ring, there is still a “natural” way to embed it as a lattice in

We have just seen how to use lattices and their covering radius, in order to understand algebraic properties of rings. On the other hand, lattices have many applications by themselves, and we can ask whether we can use number theory to construct “good” lattices.

Consider the problem of a cellular phone company who wants to build antennas. Let

be the radius such that you get good signal reception only if you are at most r meters away from an antenna. The company now faces with the problem of building as few as possible antennas (because they cost a lot of money!) and on the other hand they want to cover as much as possible space. If they build these antennas according to some lattice, then in any nice region (e.g. a big circle) with surface area

the number of antenna will be more or less

(this is Gauss circle counting method I discussed in the end of the post about lattices). Denoting by

the covering radius of

, in order to get good coverage everywhere we need that

. Moreover, if the covering radius is much smaller than

, then we can stretch the entire picture in order to build less antennas and still have good coverage.

More formally, we multiply the lattice

so that it has covering radius exactly

, and we get that the number of antenna that we need to build is more or less

, hence we are left with the problem of finding a 2-dimensional lattice

. At this point you should notice that if we started with a lattice

we should get the same result, because we did some normalization (multiplied by

). So to reduce the number of parameters in our problem, we write

is unimodular, and we are left with minimizing the expression

Or in other words, we’re looking for a unimodular 2-dimensional lattice with minimal covering radius. As this is just 2-dimensional, it is not that hard to solve, and I will leave it as an exercise to show that this is exactly the hexagonal lattice that corresponds to

such that the spheres in radius

around the lattice points do not overlap. For example in the lattices coming from

the packing radius is

Of course, we need to normalize these lattices in order to be able to compare their packing radius. Another way to think about the packing radius is given a big region

what is the percentage of

covered by these sphere that we drew. At least for the two lattices above, we can see that the packing in the hexagonal lattice cover more of the space than the  packing in the square lattice. Actually, when we consider only 2-dimensional lattices, this is again the best possible. In a sense, this should not surprize us – when bees want to create their beehive, each larva is put in a circular chamber, so in order to have the maximal number of chambers in their two dimensional hives, they also use the hexagonal lattice, so they waste as little as possible space. 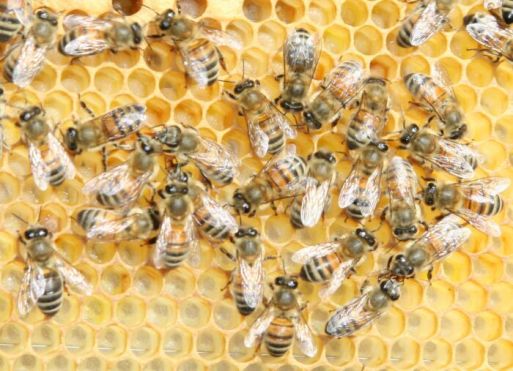 (As I’m far from being a bee expert, this of course might have a totally different reason, but I like to think that for millions of years, bees have been making lattice related optimization…)

Let us note, that if

are two distinct lattice points, then the packing radius is at most

, and a bit more thought show that there is an equality. Thus, we are interested in finding the length of the shortest nonzero vector in

. The problem of finding the minimal length of a nonzero vector has great importance in the study of lattices and their connection to number theory, and I will cover some of its roles in future post.

I want to finish with one more use of lattices and packing numbers (which unfortunately, I don’t know too much about). To make life even harder, given a lattice

we can try to find a nonzero vector with the shortest length. This problem for general lattices is used as part of encryption protocols, and it is claimed that in a post quantum computers world, where the RSA based protocols could be broken quickly, the lattice based protocols will still be hard to break. So, what I’m trying to say is that if you want to survive the post apocalyptic world, after we develop quantum computers, and still be able to use the internet (or maybe the mindnet, if we are lucky), then you should learn about lattices.

This entry was posted in Algebraic number theory and dynamics and tagged Geometry, Lattices, Number Theory. Bookmark the permalink.

1 Response to From number theory to geometry of lattices