The rise of algebraic extensions

In the post about number theory and lattices, we tried to determine when is the Euclidean distance in

. As mentioned there, not all rings can be nicely embedded in

I will only assume basic knowledge about rings, and I will not assume any knowledge about algebraic number theory. I believe that the right order is to first learn about algebraic number theory and then see its connection to lattices. This being said, in my opinion the best way to show the result in this post is through lattices (and it is usually done in this way), hence it should not be problematic for those unfamiliar with the black magic of number theorists. For those who do want to do some reading first (or after), I recommend J.S. Milne great course notes.

Historically, a big part of algebraic number theory was developed in order to solve equations over the integers. Probably, the most famous is Fermat’s last conjecture (which later became a theorem), but before that, let us try to solve some more simpler equations that naturally lead to algebraic extensions of

Consider first the problem of solving

are integers. If there exists a solution, then clearly we must have that

is an integer, but also it must be nonnegative. One last obvious but important property is that this equation cannot have infinitely many solutions, since

(and sometimes there are no solutions).

which lie on the circle of radius

around the origin. Since this lattice can be also viewed as

,  we can ask what does this problem mean in this setting. As usual, any sum of two squares can (and should!) be written as

, so a solution to this equation is equivalent to decomposing the number

. This reformulation, and a little bit of knowledge about the ring

leads to a full description of the integers

which have a presentation as a sum of two squares (for

prime, one way to prove an existence of a solution is Minkowski’s theorem). A similar question can be asked about the equation

, which in a similar process leads us to consider the ring 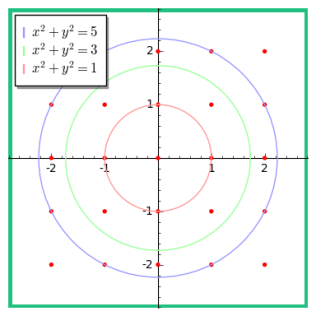 To make things interesting, we can consider unbounded curves, for example the hyperbola

. While it is not clear that there are only finitely many lattice points on this hyperbola, as in the circles\ellipses examples, it is still true. Indeed, if there are infinitely many solutions, then we can assume that they are positive so that

. Writing the equation as

. As these are integers, they must be equal so that

. As the image below shows, there are many integral points close to

, but there are only two points on this curve (and a similar claim is true for general 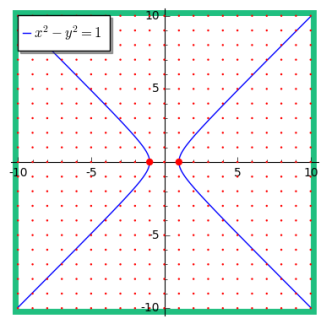 What happens if we consider instead the equation

? Following the examples up until now, we will start with the decomposition

so that we’re looking for solution in

. The reason this trick usually helps, is because it is easier to work with just multiplication in a ring (think the unique factorization for integers), than multiplication and addition as in the original equation. As in the case

, we can ask for which

there is a solution, but let us concentrate on the problem where

The geometric interpretation of

are the lattice points from

contained in two hyperbolas. But now we have another way of viewing it as

, so changing our basis to

is a lattice point from

and we’re looking for such point which satisfy

. In other words, instead of working with a “normalized lattice” 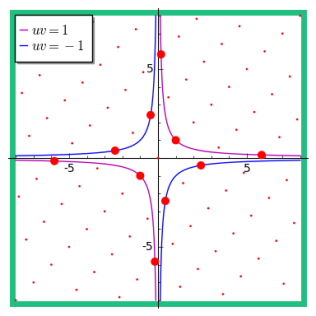 We are thus led to consider the map

which is injective and its image is exactly the right lattice above. Note that just sending

to its embedding in

will produce a dense subset, so in a sense we added one more dimension to counter this problem (actually, the fact that it is dense is exactly why the argument that

has only finitely many solutions doesn’t work here). Now that we have an embedding of the ring as a lattice, we can ask what does it mean that it has a lattice point on the hyperbolas

has the same role here as the complex conjugation

. It is an automorphism of the ring, i.e. it is invertible (with itself as an inverse) and it satisfies

. By the definition we have above, an element

and we ask what does it means that

is invertible with inverse

also. Multiplying these two equations we obtain that

– a product of two integers equals one, so

if and only if it is invertible – this is the algebraic interpretation of this geometric property. Furthermore, if

is invertible, then so is

. It doesn’t yet means that we have infinitely many lattice points on

), but we are quite close. Searching a little bit, we see that

is invertible (with inverse

. It then follows that

so we can find infinitely many points on

, or in other words, we have just used an extension of

has infinitely many distinct solutions! Also, there was nothing special about 2 – for any

which is not a square (why?), if you can find a single nontrivial (

, then you can find infinitely many distinct solutions (try to see if you can prove this result without using the algebraic interpretation, i.e. the multiplicative structure of the set of solutions). We are left to ask whether we can find a single nontrivial solution, or in other words, find the group of invertible elements in

which correspond to integer solutions of

Going back to our example with the ring

, it can be viewed as a lattice inside

and its invertible elements are exactly the lattice points on

, and moreover there are infinitely many such points. While the hyperbolas

are “normalized” they are still not that easy to work with, and we rather work with straight lines than these hyperbolas (or algebraically speaking, we prefer addition to multiplication). Thus, we use the standard trick to move from multiplication to addition – the logarithm. Given a point

so that these points lie on the 1-dimensional subspace

. The fact that the invertible elements form a group, imply that their images in

form an additive subgroup. Finding a nontrivial solution (=invertible element) is equivalent to show that this group is not trivial, and at least in the case

we see that this group is actually a lattice in

Everything mentioned up until now is not special for

and is true in much greater generality. I will finish this post with the formulation of these general results, which are due to Dirichlet.

be a finite extension. A unital subring

is called an order if

. Similarly we can take the rings

is a finite extension of degree

, then it can be shown that there are exactly

be the number of such maps with

be the number of maps that don’t satisfy this condition (each such map comes with its complex conjugate), so that

In the examples we used so far, we only had two embeddings – the identity and the conjugation (both in the “complex” cases like

). You should check that the definition and theorem below, when restricted to these example, are exactly what we proved in this post so far.

be a finite extension. Let

be its real embeddings and

be its nonreal embeddings. Define

We are finally ready to state the theorem for general field. Parts (2) and (3) are usually called Dirichlet’s unit theorem.

be a finite extension and let

be an order. Then

Remark: Going back to the problem of solving the equation

, the theorem above not only tells us that there are infinitely many such solutions (for

square free), in a sense they are all generated by one solution. In this case

is a one dimensional space. In the case of

, every solution arises from an element of the form

Somewhere in the beginning of this post I mentioned Fermat’s last theorem\conjecture, but this was a long time ago and as this is already a long post I will leave it for a future post.